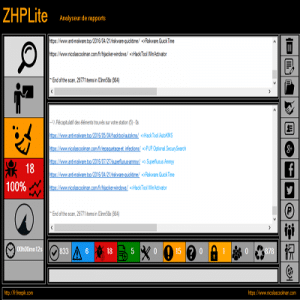 ZHPLite is a software for analysis of diagnostic report ZHPDiag. Each line is classified in a category and a logo allows a faster tracking.

Every day new detections are identified by my ZHPDiag diagnostic tool. These are mainly the software potentially unwanted. It also proposes the Elimination of unnecessary but legitimate programs.

This is a new version of the ZHP software completely rewritten and offers another interface. Each line is classified in a category and a color that allows a faster tracking. The analysis is very fast because a large number of lines are already dealt with in the report ZHPDiag. This version is light and portable, that is to say that it requires no installation.

The interface consists of five areas. A left sidebar (Analysis,Balance sheet,Script), a right sidebar (Import,EULA,...) a footer (footer) for categories and two boxes of reports. In the final analysis, a ranking gives the number of elements found in each category and a color to distinguish them. A partial for script ZHPFix is also written in the end report which has to be validated by an expert of the Forum. ZHPlite analyses and proposes a script for reports FRST, Addition and Farbar Shortcut. Operating system : Windows XP,7,8,8.1,10 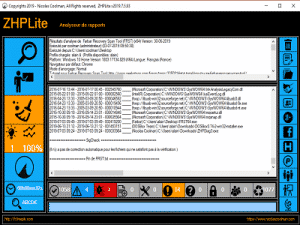 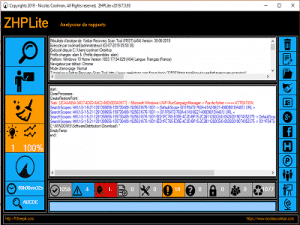 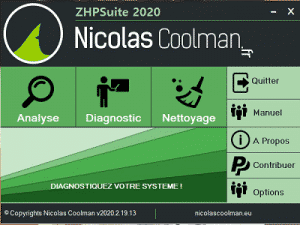 How to remove fake Microsoft detection ?

If you have a download problem with a block by Microsoft Security (Windows Defender). This is a fake positive from Microsoft that quarantines my software. Waiting for the necessary is achieved by the support of the Microsoft security team, you have to put the file downloaded "ZHPLite.exe" in exclusion mode. 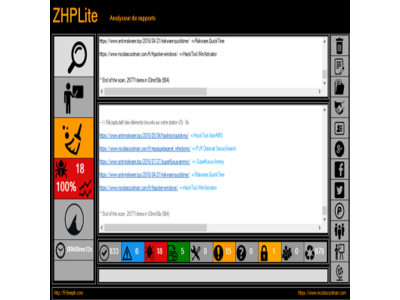